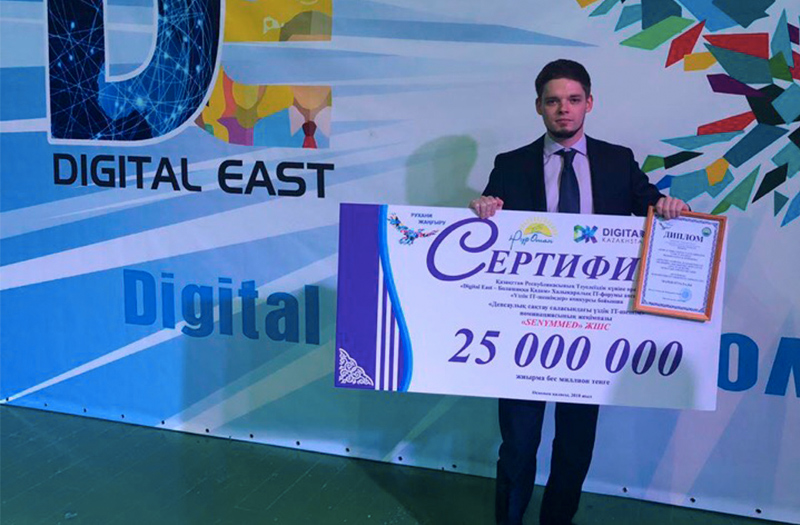 December 13, 2018 The Government of Kazakhstan set off on the road to the digitalization of the economy, making alternative energy, new materials, biomedicine, big data, Internet of things, artificial intelligence, and blockchain its priority areas. The Digital Kazakhstan program was adopted, in order to imple-ment this policy.

The highlight of the program was the Digital East Forum, the final of which took place on Decem-ber 5 and December 6 in Ust-Kamenogorsk, East Kazakhstan. The Forum was to select the best government grant applications for the implementation of innovative projects in the following categories: Education, Culture, Housing & Public Utilities and Construction, Agro-Industrial complex, Geographic Information system and Health. 35 IT companies from Kazakhstan and Russia took part in the competition. A total of 57 applications were received, of which six winners were selected to be the best in their respective categories.

In the healthcare solution category, the winner was the joint project of iFORS and its partner SenymMed (Remsmed telemedicine system distributor) in Kazakhstan. The jury was presented with a detailed pilot project for the automation of the East Kazakhstan Regional Hospital (VKOB) using the Remsmed platform (link to remsmed.ru opens in a new window), which has long proven itself as a reliable solution. Representatives of the delegation of Kazakhstan had the opportunity to prove it for themselves during their visit to the First Moscow State Medical University last summer, where the system has been successfully implemented and operating for several years.

The winner’s certificate was ceremoniously awarded to Stepan Tomlyanovich, iFORS representa-tive, by the Deputy Prime Minister of the Republic of Kazakhstan, Askar Zhumagaliyev, and Akim of the East Kazakhstan region, Danial Akhmetov.

As early as January 2019, an implementation agreement will be signed with the customer. The pro-ject is planned to take 3 to 6 months. The implementation of the telemedicine system will be accom-panied by the widespread use of such smart devices as cardiographs, scales, tonometers, wrist bands, etc. It is planned to introduce a ready-made “boxed” version of Remsmed in web and mobile formats to allow remote monitoring of patients.

VKOB is to become a kind of testing ground for operating the system, and in case the experience is successful, the project will be recommended for replication in the entire territory of Kazakhstan. Therefore, it is planned to integrate the system with a number of electronic devices that are common in the country, as well as to create a localized version of the solution.